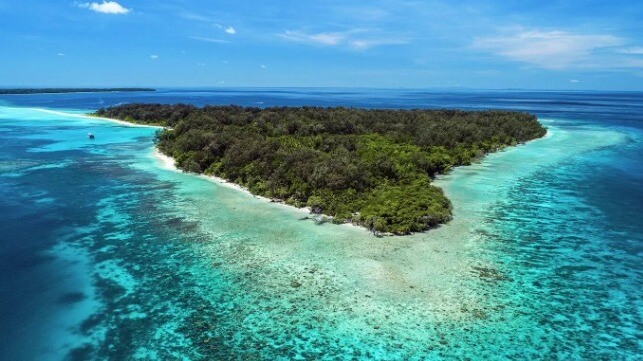 An entrepreneur could sell strategic Pacific islands to Chinese interests

An Australian private businessman is getting ready to sell a chain of 21 coral atolls located about 500nm northeast of Cairns, Australia – to Chinese interests.

Ian Gowrie-Smith, a retired entrepreneur who has been involved in oil, gas, mining and pharmaceutical ventures over the decades, owns the conflict islands in Papua New Guinea. Located between the Solomon Sea and the Coral Sea, the small chain of islands is home to 30 permanent residents, a turtle conservation program, a small resort and enough land for a strategic 3,000 meter runway.

Gowrie-Smith confirmed to Australia’s 9 Now that his agents are in talks with Chinese buyers about a potential sale. The price under discussion is around $25 million and he has offered to negotiate with the Australian government to sell at a discount, given the potential national security implications of a Chinese facility next to northern shipping lanes. -Western Australia.

Australian politicians have recently expressed serious concerns about China’s new security deal with the Solomon Islands government, which could include basic arrangements for Chinese security forces. The Conflict Islands are even closer, around 300nm, and Gowrie-Smith expressed curiosity as to why the Australian government was not interested in making a deal that would put the islands in Australian hands.

Any Chinese presence in the conflict islands would be subject to the governance of Papua New Guinea; China is New Guinea’s largest customer for natural resource exports, and the two countries have recently begun discussions on a free trade agreement.

China has a history of building island military bases on coral atolls in the South China Sea, building them first as civilian facilities before deploying air defense and anti-ship missile systems. The PLA Navy is also believed to be pursuing a base deal at Cambodia’s Ream naval base, once the site of US military aid investment. Beijing’s ambitions extend to the strategic islands of the South Pacific: in June, Chinese Foreign Minister Wang Yi made a major tour of the Solomon Islands, Fiji, Kiribati, Samoa, Tonga, Vanuatu, Papua New Guinea and Timor-Leste to support a “marine spatial plan.” If accepted, the plan would have given China a greater role in regional maritime affairs – but it was turned down.