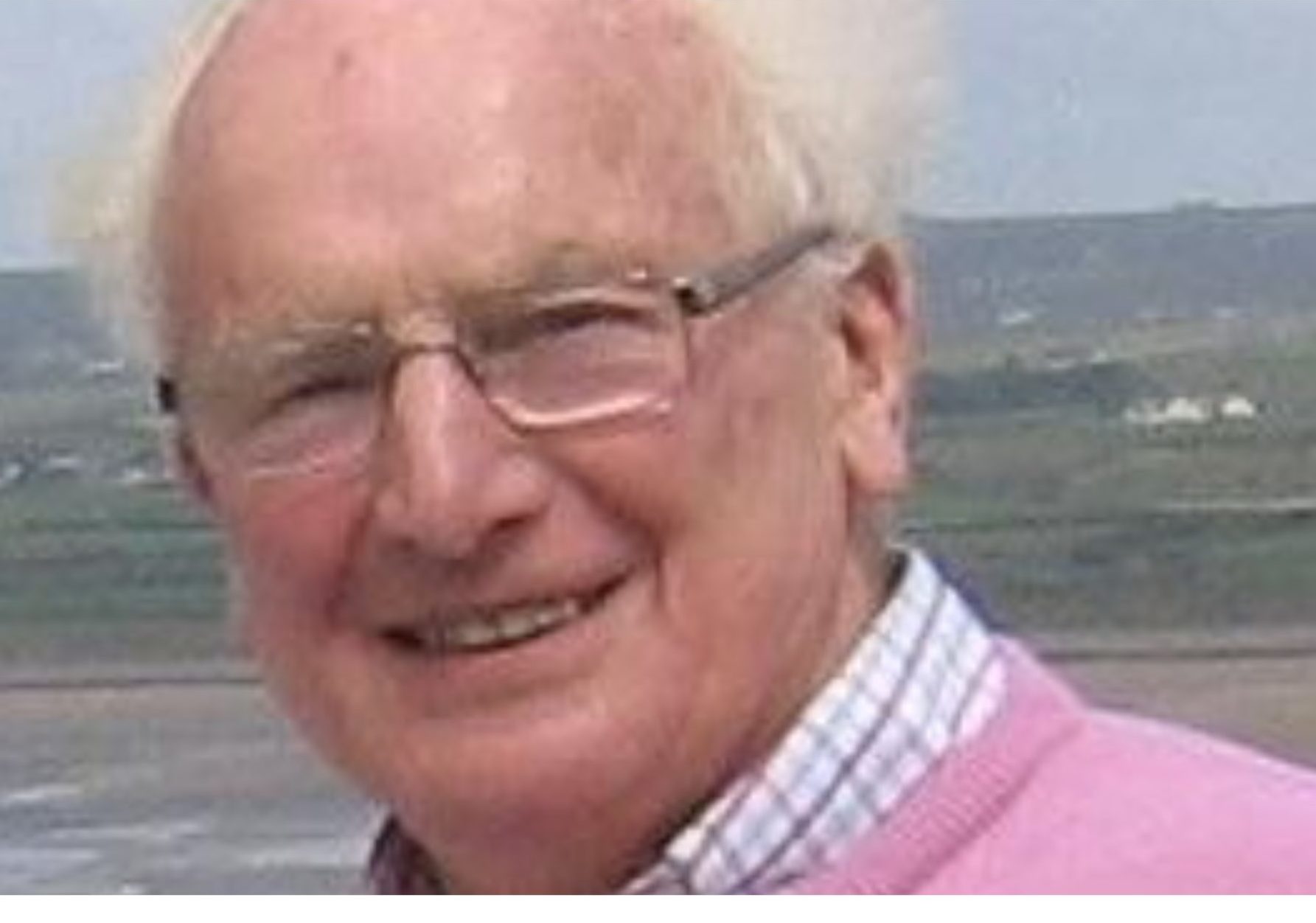 THOMAS P (Tom) Crotty, Braganza, Athy Road, Carlow, who passed away peacefully at home on Thursday February 3 surrounded by his loving family, was a highly respected and popular member of Carlow town business life for many years . .

Tom, 93, was the former owner of Crotty’s Bakery on Tullow Street. Crotty’s was a long-established and successful bakery that provided substantial employment for Carlovians over generations.

Tom Crotty’s life was summed up succinctly by his son Tom Jnr during his dad’s funeral mass at Assumption Cathedral on Monday, February 7. Speaking on behalf of Tom’s children, Paddy, Mary, Donal, Alacoque and himself, Tom Jnr said his father was born in Rose Inn Street, Kilkenny on July 5, 1928, the son of Patrick and May Crotty. He was educated at St Kieran’s College, where he enjoyed playing hurling and running.

“The school athletic achievement that Dad is most proud of was winning the annual 880-yard race, which all of the school’s students participated in. He won two years in a row, the second year starting from the back of the field. He left school after his baccalaureate to work in the family bakery in Rose Inn Street, where he learned his trade as a baker.

Tom Jnr continued: ‘In 1954 our grandfather Crotty acquired Slater’s Bakery in Tullow Street, Carlow and dad helped by spending time traveling from Kilkenny to work in the bakery. Something must have drawn him to Carlow, as he moved for six months after marrying mum in July 1954.

“Mum and dad lived above the Tullow Street bakery, where they had the first two of their five children, Paddy and Mary. In 1959 they moved to Green Road, where Dad began his passion for gardening. Rumor has it that the house was chosen because it had three large greenhouses.

“He spent many happy years on the green road, but eventually they outgrew the size of the house and moved to ***Greenville*** on Athy Road in 1967. Again, popular belief is that the size of the garden had a big influence on the buying decision. Dad had a real passion for the land and everything that grew there. He spent so many hours between the garden and the greenhouse. His ability to know where plants should go in the garden to give maximum effect was amazing; from spring to winter, the garden has always had amazing colors and surprises around every corner. Lawns like carpets dissected from paths and, surrounded by apple trees, his garden was not only a work of art but a wonderful place to play and grow.

Tom Jnr said his father was always experimenting with growing different varieties of flowers and vegetables and always taking cuttings from plants all over the country and further afield, always having a pocketknife and a plastic bag handy. “I was told he had one of the first trailing geraniums in the country, which he had brought back as a cutting from a trip to Spain. Dad’s garden in ***Greenville*** was something special, not just for him but for everyone who has ever visited, and something we were all so proud of. Anyone who has ever gone to visit mum and dad in Bragança would have seen that he had once again waved his magic green fingers and his vision, but this time on a much smaller scale with a house and garden that honored his vision and to mom’s fine tuning. .

“The bakery played a huge part in Dad’s life and the saying that baking was in his blood was definitely true for him. He loved everything about it: putting his hands in the flour, mixing his best bracks with the hand in a trough, making sure everything around him was done as it should be. He took great pride in his shop, and nothing gave him greater satisfaction than happy customers leaving the shop with bags laden with fresh bread and crisp, and cakes nestled in Crotty’s red box, all ready to be eaten by so many Carlow families and customers from further afield.

“Dad was always known as a fair employer and was affectionately known as the boss or boss. Listening to all the stories over the years and especially over the last few days he has given so many people their start in working life and so many people have been successful in so many different careers and always thank dad, or Mr. Crotty , for this chance.

He was quite competitive and always entered many baking contests at Crotty’s, which they always had great success in. “Two achievements stand out: the first being that Dad lovingly transported his madman to London at the National Baking Competition, with which he won the gold medal, and, secondly, when the bakery won the Confectionery Shield of all over Ireland for the best confectionery in the Irish National Baking Competition.

‘He will be remembered as the true gentleman in the white coat and baker’s hat, who never stopped running around to make sure the people of Carlow got the best bread and cakes from his magic shop every day of Tullow Street. Dad was not only the baker, but he was also a businessman, who gave a lot of time to the local Chamber of Commerce, the Lions Club and the Carlow Rotary Club. He was an extremely generous man who actively raised funds and donated to many local charities. Like mum, he had a passion for art – he may not have had his wife’s artistic skills, but he had a keen eye for a good painting and donated it to the art collection of Carlow.

He loved sport and nothing gave him happier, especially lately, than sitting and watching rugby games on TV and was seen to shed a tear as Ireland beat the All Blacks in November. It was a familiar sight, and Tom often recalled great sporting moments over the years.

Tom Jnr continued: “He loved his golf and adored Carlow Golf Club, spending many hours on committees helping to run the club. He really enjoyed helping young and young golfers improve their game and representing the club in various tournaments – so he became the driving force behind the youth committee for many years.

“As a golfer he got down to simple numbers – a great achievement in itself – but I don’t think Tiger Woods hit as many practice balls as dad: in the garden, planting in pots, over the trees, through the trees and sometimes at the odd wall, to be that mystical shape that cuts through the morning fog or the evening twilight from the practice fairway after probably hitting a hundred balls up until he succeeds.

“He loved the course and often dug up sycamores or oak trees there, which he brought home, where he grew them in his nursery until they were big enough to be replanted around the course for replace some of the older trees that have fallen. We were also only recently informed that dad planted a tree near the fourth tee, to which he grafted a willow to an apple tree to grow a unique tree, which still grows there today.

“I think having the honor of being captain, chairman and later director of the club sums up his dedication and love for Carlow Golf Club.

“Music was the rhythm of life. He really loved classical music, from symphonies to operas. Dad not only wanted the music, but also who composed the music and the story behind it. He has spent many hours listening to music on records, CDs and lately on YouTube. He and mum traveled everywhere to attend musicals, concerts, recitals and operas, with a particular love for the Wexford Opera Festival, which was always the highlight of the year.

“When it came to dancing, mom and dad lit up the dance floor, and as some people have told us over the past few days, people would often leave the dance floor and sit down to watch them dance together in perfect movement, dad on tiptoe floating across the dance floor.

“Mom was the love of his life; they were inseparable from the start. They really loved each other, and when Mom died he was heartbroken, but he kept his promise that he would be with her until the end. Dad has given us all incredible memories to cherish over the past few months since Mom passed away, but we knew our time with him was on borrowed time and we had to let it go to her.

“So dad, we hope you’re next to her dancing with the angels. You were our father, grandfather and great-grandfather and we are all so proud of who you were, and you will certainly never be forgotten.

Tom Jnr said the Crotty family wanted to give special thanks to Dr Ben Parmeter, Dr O’Connell and the staff of the Respiratory Unit at St James’s Hospital, the Carlow/Kilkenny Home Care Team, the public health nurse Fiona Doogue, the fantastic ladies of Bluebird Care and Anita O’Neill, who all looked after and looked after him so well; also Martina Carey and Patrick Murphy, who have been part of their parents’ lives for more than 25 years.

There was also an expression of thanks to Orla and all the staff at White’s Pharmacy for looking after Tom so well over the years.

Special thanks were also extended to Fr Tom O’Byrne, Adm, Carlow, who celebrated his funeral mass, for being so kind to him and the Crotty family over the past few months, and to the funeral director Rory Healy and his team for their professionalism, to everyone present and over the past few days for helping them through a sad time, and to everyone who shared these kind words of condolence with the family.

Tom Jnr concluded his eulogy by saying that his father was one of life’s true gentlemen, who loved life and lived for the moment, and as he would say “never worry, just be worried”.

“Recently, I read a passage from an autobiography of Captain Tom Moore to Dad. On reading the following words, he simply replied, ‘It’s so true.’ big changes, I always looked on the bright side. I’ve been through war, pandemic and heartache, triumph and tragedy, and yet I’m still here, so I can only believe that tomorrow will be a better day.

“Dad, we love you, we will miss you, may you rest in peace and know that we are happy to have you back in the arms of your beloved Margaret Mary.”

After mass, Tom was laid to rest with his beloved wife in St Kieran’s Cemetery, Kilkenny.

Tom’s grandchildren Laura, Patrick, Catherine and Edward and his wife Caroline and their three children Niamh, Saoirse and Maeve joined to watch the funeral mass on webcam from England, Australia and Vanuatu.

It’s time to get out of the “career lane”