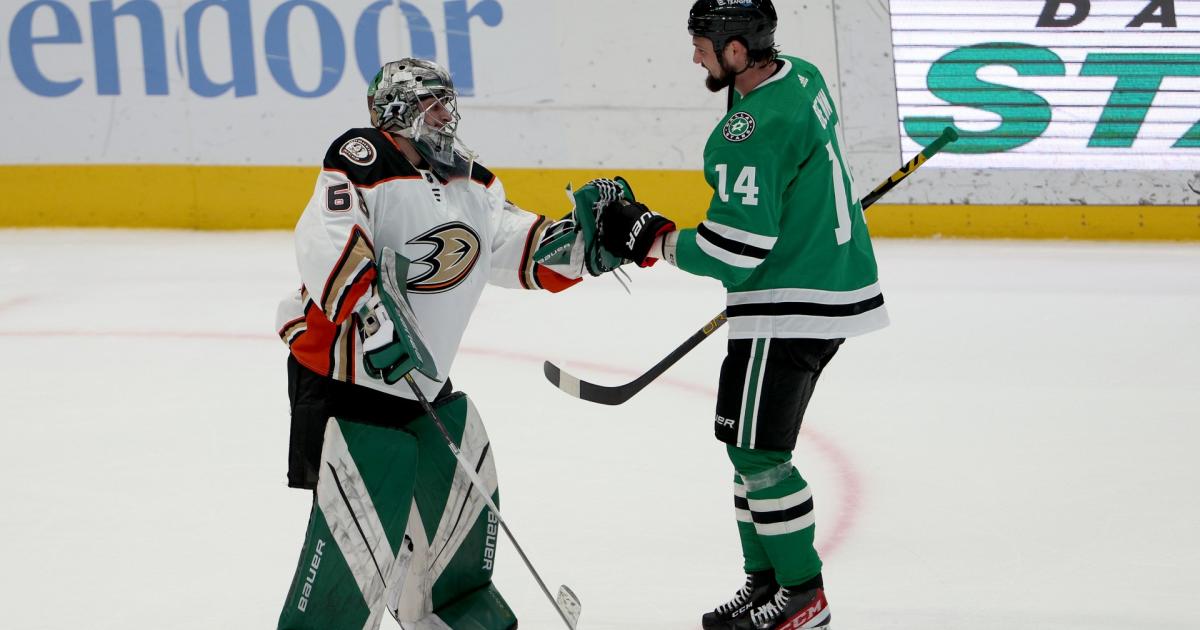 What better way to end the 2021-22 NHL regular season than with an emergency backup goalie appearance.

That’s right. For the first time this season, an emergency back-up goaltender, or EBUG, was needed in an NHL game as 28-year-old Tom Hodges entered the Ducks-Stars game on Friday.

Tom Hodges laced them up and is now in net for the @AnaheimDucks! pic.twitter.com/B2ZjbEjWgP

Anaheim took John Gibson and Anthony Stolarz out of the game with injuries, which forced the team to require the services of Hodges. He entered the contest early in the third period with the score tied at 2.

While most games on the NHL schedule for Friday had nothing at stake, this one was different. The Stars needed a win to secure the Wild Card’s top spot in the Western Conference and a date with the Flames in the first round. A loss dropped the Stars to second in the Wild Spot, instead facing the Avalanche in the first round of the playoffs.

Dallas ended up getting a shot past Hodges and added an empty-netter for a 4-2 win. Hodges made two saves on the three shots he faced, with the only goal coming on the power play through Jason Robertson.

Nonetheless, it was a once-in-a-lifetime experience for Hodges and joins a roster with Scott Foster and David Ayres as EBUGs who got the chance to live out the dream of dressing up in an NHL game.

🧡 this team. #Travel together pic.twitter.com/yarDMTHw1K

MORE: What is the most goals scored in a match by a team this season?

Who is Tom Hodges?

Hodges serves as the emergency goaltender for Stars home games. According to Bruce LeVine, the Stars broadcaster, Hodges is originally from the UK, but moved to Texas when he was younger. He played high school hockey for Plano West High School.

He was eventually noticed by Stars staff while playing hockey at Southern Methodist University in Dallas.

Thomas Hodges was born in the UK. Arrived in Texas at the age of 11.
Fell in love with the game and was “discovered” by the Stars as a practice goalie option while playing club hockey at SMU

This is actually Hodges’ second time entering as an EBUG. He once made an ECHL appearance for the Allen Americans as an emergency goaltender.

Hodges first discovered hockey while visiting the Stonebriar Mall. He played another professional game as an ECHL Allen American in 2017.

Coming to the NHL is an even bigger feeling for Hodges, who struggled with sight issues at a young age. It made the dream of playing in the NHL even more unrealistic.

EBUG, Thomas Hodges told me he lost his sight when he was young so he never thought the NHL would be possible for him… today that dream came true… Love stories like these 🤍🤍

What is an Emergency Substitute Goaltender (EBUG) in the NHL?

An EBUG in the NHL is a goaltender who is not on the roster, but attends all of a team’s home games, sometimes also training with the team. He is there in the situation where one loses his two goalkeepers due to injuries, illnesses, etc. and needs a goalie to get into the net to play the game.

This is usually an ordinary individual who has past goalkeeping experience which is rarely actually needed. But as we saw Friday in Dallas and have seen many times over the past decade, there are situations where EBUG is needed and comes into a game.