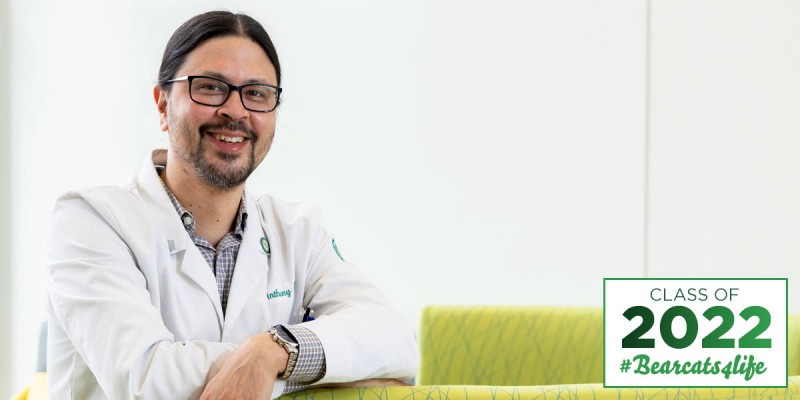 Anthony Hopkins was not the typical pharmacy student.

For starters, he’s almost 20 years older than most of his fellow graduates. He has a bachelor’s degree in biology and psychology from Syracuse University, as well as a music industry degree from SUNY Oneonta. Additionally, his professional background includes work in research, construction, in an animal hospital, freelance audio work, and teaching guitar. As the son of a 20-year Air Force veteran, he also spent most of his childhood overseas.

“I got to a point where I knew I needed to figure out what I was doing with my life,” he said when asked about his decision to pursue a career in pharmacy.

When the School of Pharmacy and Pharmaceutical Sciences opened literally a block from his apartment, he launched into his new life.

“It was pretty much full from the time I decided to apply in early 2018,” he said. “I was preparing to take the PCAT, work full time, and take a few classes over the summer. It was non-stop until the winter break, but it got easier once I started school and was no longer working full time. Then I was able to fully concentrate on school.

“I guess I’ve tripped over so many things since I started pharmacy school, pharmacy school being one of them,” Hopkins said. “I was someone who 6 or 7 years ago wouldn’t step out of my comfort zone and take risks. Now I’m more willing to put myself out there and see what happens. pass.

He and fellow student Tony Feng teamed up to enter the American Society of Health-System Pharmacists (ASHP) Local Clinical Skills Competition, placing second in 2020 and winning in 2021. “I was just trying to fulfill a requirement extracurricular,” he mentioned. “As P3s (third year students), we finished second and were able to represent Binghamton in the New York State Council of Health-System Pharmacists Student Clinical Skills Competition. We went in with the attitude of “Let’s have a little fun” and we ended up winning. Tony is an extremely smart guy, and we complimented each other well and worked really well as a team. By winning the local ASHP competition last year, Feng and Hopkins were able to represent Binghamton University in the ASHP National Clinical Skills Competition held at the mid-year clinical meeting of the ASHP.

Next up for Hopkins is a PGY-1 (first year post-graduate) residency at Highland Hospital in Rochester, NY, where he will spend the next year honing his skills as a pharmacist. After that, he will decide if he wants to try a second year of residency to specialize in a particular area.

“Applying for residency is stressful, but manageable as long as you start early,” Hopkins said. “You really start writing and rewriting your letters; double, triple and quadruple verification of everything you send; and lamenting the choices you wish you had made sooner! he added. “We put a lot of pressure on ourselves and maybe added a little unnecessary stress, but when you’re trying to start that next phase of your life – and that’s really what you want to do – the idea of ​​not Landing that residency or job can be quite stressful.

Sarah Spinler, professor and chair of the Department of Pharmacy Practice, said she knows Hopkins as a top university student who is comfortable with herself. She mentored him at times throughout his career path.

“It’s not just about being a top college student when applying for residency,” she said. “It doesn’t get you selected. When I spoke with him, he was sometimes so laid back that his drive and goals didn’t always materialize. On the coaching side, I encouraged him to be clear about what he wants to achieve.

“Everyone who has worked with him would love to continue working with him,” she added. “I think we are lucky and once he completes his training anyone would be lucky to have him as a colleague.”

“Since the game [for his residency] I’m a bit of a different person,” Hopkins admitted. “I’m relieved and some stress is gone, but there are still a lot of hurdles to overcome.”

As well as being an avid student, Hopkins hopes to one day be a teacher as well and has tutored other pharmacy students since his P2 year. “I really enjoy the teacher-student relationship, or in a less formal way, I like sharing what I know with others,” Hopkins said. “It’s great when the student wants to learn and makes an effort, and you see him progress. I look forward to this as part of my residency with the potential to tutor some pharmacy students and gain teaching certification for the future.

And even though he’s on his way to the pharmacy, Hopkins hasn’t left all of his past lives behind. He is greeted by his three cats, Christmas, LJ and Lola when he walks through the door of his apartment. “When I worked at the animal hospital, it was also a cat shelter and it was not uncommon for me to bring home senior cats,” he said.

“I’ve also been a musician since high school, starting out as a guitarist and then switching to electric bass about 15 years ago,” he said. “I did a lot of indie audio stuff with a local recording studio, a little session stuff for local artists. Before the pandemic and pharmacy school, I was in a country band for a while. It was great fun and I still play with them once a year now at a local breast cancer benefit. I hope to come back and play with them this year and I hope to get that life back one day.

Hopkins will also be missed by his comrades.

“I’m really, really happy to be part of this class,” he said. “It’s full of amazing future practitioners and I’m proud of how our class has responded during the pandemic, spending a lot of time providing vaccinations and so many of them continuing to work throughout the pandemic. I can’t say enough about the character of this class.

“The environment at school is very positive and nurturing,” added Hopkins. “From teachers and students as well. We always help each other. There is always someone to ask and the faculty brings a certain energy to the program. Everyone agrees with the attitude that we’re all going to get through this together. I like being part of it. »

But now, looking to his future, Hopkins is leaning towards a PGY2 (second year postgraduate) residency in emergency medicine. “I didn’t have a lot of that experience, but I saw a bit of it and really liked it, and the toxicology,” he said. “I learned to keep my options open. Every time I start something new, I’m interested. You never know where your opportunities will arise.