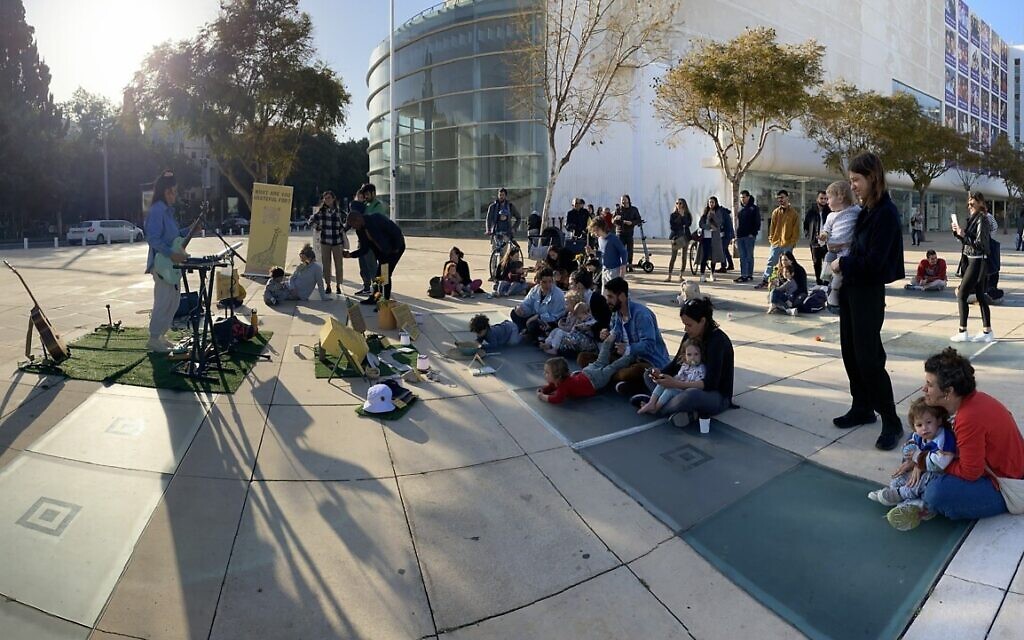 An Israeli immigrant from the City of Brotherly Love wants to make the world a better place with The Wall of Gratitudelocated right in the middle of his new hometown, Tel Aviv.

The art installation, located in the center of Habima Square, a large public space marked with sunken gardens and surrounded by the Habima Theater, is part of Philadelphian Max Marine’s planned digital art collection which he calls Grateful Labs.

People come to the wall to write, draw or paint what they are grateful for, sometimes taking part in morning yoga classes, meditation sessions or evening concerts hosted by Grateful Labs.

The final day of the Tel Aviv wall location is Saturday, April 9, with two events – a guided gratitude meditation and announcements of the winning artists who drew on the wall – taking place on Saturday.

Marine, who worked in venture capital until a few months ago, came up with the idea for The Gratitude Wall with two friends, her partners in the business. They received permission from the Tel Aviv Municipality to install the wall for two weeks, attracting over 1,000 people to write their thoughts on the surface of the wall.

“It really feels like we’ve done something, changed the energy of the city and the planet a bit,” Marine said. “Now we have to figure out how to make it more accessible.”

The Gratitude Wall, an art installation located in the middle of Habima Square in Tel Aviv until April 9, 2022, part of (Courtesy Max Marine)

There is a lucrative side to this venture, as Grateful Labs hopes to support itself by creating Grateful Giraffe NFTs, a collection of digital art that it will sell on June 21, World Giraffe Day.

Non-fungible tokens (NFTs) are a digital asset that represents real-world objects, such as art and music, and are bought and sold online, often with cryptocurrency, and are becoming an increasingly most popular way to buy and sell digital artwork.

Marine, who left the venture capital world in November, researched Web3 trends (a blockchain-based iteration of the web) and raised her own cryptocurrency fund, but was inspired by some from his own personal experiences to spread a little more gratitude in the world, and to use the arts to fund this idea.

He and his partners landed on Grateful Giraffes as the company name, looking for an alliterative word that fits grateful, and agreeing that giraffes are a universally loved animal.

They hope to install a wall of gratitude in Tel Aviv’s Rabin Square in May.

They also plan to create an international campaign to install walls of gratitude in key locations across the United States such as Times Square and Central Park in New York, as well as in other countries.

We tell a critical story

Israel is now a much bigger player on the world stage than its size suggests. As a diplomatic correspondent for The Times of Israel, I am well aware that Israel’s security, strategy and national interests are always under scrutiny and have serious implications.

It takes poise, determination, and knowledge to accurately convey the story of Israel, and I come to work every day aiming to do just that.

Financial support from readers like you allows me to travel to witness both the war (I have just returned from a report in Ukraine) and the signing of historic agreements. And it keeps The Times of Israel the place readers around the world turn to for accurate information about Israel’s relationship with the world.

If it’s important to you that independent, factual coverage of Israel’s role in the world exists and thrives, I urge you to support our work. Will you join the Times of Israel community today?

Yes I will give

Yes I will give

Already a member? Log in to stop seeing this

You are a dedicated reader

We’re really glad you read X Articles from The Times of Israel over the past month.

That’s why we started The Times of Israel ten years ago – to provide discerning readers like you with must-read coverage of Israel and the Jewish world.

So now we have a request. Unlike other media, we don’t have a paywall in place. But since the journalism we do is expensive, we invite readers to whom The Times of Israel has become important to support our work by joining The Times of Israel community.

For just $6 a month, you can help support our quality journalism while benefiting from The Times of Israel WITHOUT ADVERTISINGas well as access Exclusive Content only available to members of the Times of Israel community.

Thanks,
David Horovitz, founding editor of The Times of Israel

Already a member? Log in to stop seeing this