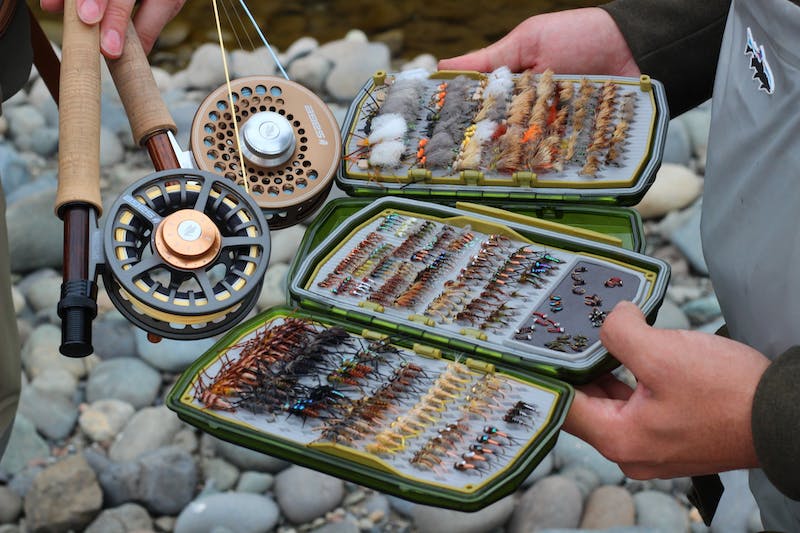 Fly fishing: more than a hobby

One fly fishing trip was enough for Curtis Jones to get hooked immediately.

It all started the summer after their freshman year of college when Curtis Jones decided to try fly fishing – a method of fishing where a lightweight, invertebrate-like artificial fly is cast on/near the surface water to catch fish.

He bought an inexpensive rod and reel and ventured down the Wilson River himself.

On the river, his only focus being the mesmerizing sight of the drifting artificial fly and the wild fish swimming below, Jones was in a state of bliss.

“We’ve heard people say once you get into it, it’s your hobby for the rest of your life,” Curtis Jones said.

For the Jones twins, however, fly fishing became more than just a hobby. It’s become the thing they wake up thinking about, look forward to on the weekends, and talk about during the week. Fly fishing has even become the center of their career paths.

“It’s just that when you’re here, nothing else matters and you never want to leave,” Adam said.

Growing up, Curtis and Adam spent a lot of time together and enjoyed being near rivers. They did a lot of camping, hiking, and conventional fishing, but never fly fishing.

It’s no surprise that the twins are completely self-taught in fly fishing – aside from the sages they’ve met on the river who offer advice. Nor is it surprising to learn that they quickly developed a unique talent for fly tying, an intricate method of making artificial flies by tying materials to a hook with thread to replicate fish prey. . It takes expert hands and patience.

As children, Curtis and Adam said they constantly used their hands to create and put their own artistic spin on things.

“I knew they both had artistic talents from an early age,” said their father, Greg Jones.

Curtis, who has prolific oil landscape paintings displayed at wineries in the Willamette Valley and sold at art shows, was immediately inspired to paint the rivers where he goes fly-fishing. His paintings are a way to express his love of rivers.

“To me, fly tying is pretty much the same as painting,” Curtis said. “It’s the same creative process.”

Adam loves fly tying and it allows you to create a pattern or a fly that has never been done before, he said. He thinks it’s really rewarding to tie a fly and it works, especially when it’s a pattern he and Curtis made together. It also saves them some money.

The Jones twins often use fly fishing entomology, the study of insects, to decide which flies to tie based on the insects the fish are feeding on. They turn over a rock in the river to observe what insects are on it, then tie flies according to the insect they are trying to imitate, keeping in mind the color, the size, the presence of legs , etc

“Part of the fun is figuring out which flies work and which don’t,” Adam said.

Although they sometimes go fly fishing individually, they love going together to figure out what works as a team and help each other spot fish, Adam said.

“Sometimes when the water is really clear and you can see the fish moving, I get up on a ridge and tell Curtis exactly where to cast,” Adam said.

Curtis’ first MECOP internship with the Oregon Department of Transportation’s construction office in Astoria saw him frequently fly-fish solo in a cove near his home where he became fascinated with learning his skills. details. Curtis enjoys being alone, throwing melodic strokes into the river, and often not talking to anyone all day.

This experience, in addition to being introduced to a new subset of civil engineering, changed his career path.

“When I was first introduced to water resources engineering, especially stream restoration, nothing else in civil engineering mattered,” Curtis said. “I knew I wanted to do this.”

Fly fishing also changed Adam’s career direction. Adam started at UP as a mechanical engineering specialist with an interest in clean energy. Fly fishing sparked his interest in hydroelectricity because it is a renewable source of energy, but one that creates problems for fish, he said.

“If I had a career goal, it would be to make hydroelectricity better for humans, but also to make it safer for fish,” Adam said.

Next fall, Adam will be an intern at Portland General Electric working with their hydroelectric plants. Curtis will intern at AECOM to work on stream restoration.

“It’s been so spectacular to see them take their passion for fly fishing into their college careers,” said Greg Jones.

Jordan Farina, assistant professor of mechanical engineering and fly fishing enthusiast, is inspired to see young people like Adam and Curtis passionate about fly fishing and advocating for the conservation of native rivers and fish.

“Curtis and Adam are exactly what we need,” Farina said. “People who care about something, then take that pursuit to the next level and build their careers from it. I’m not always the most optimistic, but it’s nice to hear stories like Curtis and Adam’s.

Although they started in rivers near Portland, they slowly ventured further into places they never would have gone without fly fishing, Adam said. Their favorite rivers for fly fishing are the Deschutes and the Metolius. Coastal rivers, such as the Trask, Wilson and Kilchis, and local rivers such as the Clackamas are also where they frequent. They feel lucky to live so close to great fly-fishing rivers, Adam said.

Their love of fly fishing isn’t just the act itself. A typical day involves waking up around 4:30 or 5 a.m. on a Saturday morning, driving two hours, walking an hour to a good spot in the river, and then fishing all day. They enjoy every part of it.

Some fly anglers catch and release and some catch and hold. The twins mainly catch and release. They love to admire and enjoy fish when they catch one and take care not to harm them by using barbless hooks and keeping them in the water when not handling them.

The feeling of holding a fish in your hands and having a tangible connection to the wilderness of the place is one of Curtis’ favorite parts of fly fishing. For Adam, walking to a perfect body of water that looks “fishy” and then watching the fly drift above the water as the fish swim to the surface is incredibly satisfying.

The twins catch a variety of trout, from red rainbows native to central Oregon to coastal cutthroat trout. They would like to start fly fishing for salmon once they have the equipment to do so.

They can’t help but feel a connection to the wilderness and the river’s history when they catch a fish native to Oregon.

“It’s really special to be able to interact with a species that was here long before us and fought everything to survive,” Curtis said. “When I sleep I always catch myself thinking about how the river never stops flowing and how when you see a salmon swimming past you and you think about how far it has traveled to get back to the same where it started, and it’s just crazy to think about.

While most fly anglers are between the ages of 25 and 52, Curtis and Adam are particularly young to already be seasoned fly anglers – not to mention fly tyers as well. Many young people don’t start fly fishing because they haven’t been exposed to it yet, and equipment can be expensive at first, the Jones twins said.

“I think the cool thing about being young and doing this sport is that older guys who have fished the same river their whole lives will see us and want to give us so many tips and lessons,” said Curtis. “It’ll be us when we’re 70, still fly fishing.”

In their 70s, they hope to have also made many strides in conserving the river ecosystems and fish that are so dear to them, as well as inspiring others to align their passions with their careers.

“We’re going to the McKenzie River this weekend to fly fish, and not that I don’t like school or my classes, but going there to fish is all I can think of this week. “, said Adam.

Sophia Truempi is a journalist for The Beacon. She can be contacted at [email protected]