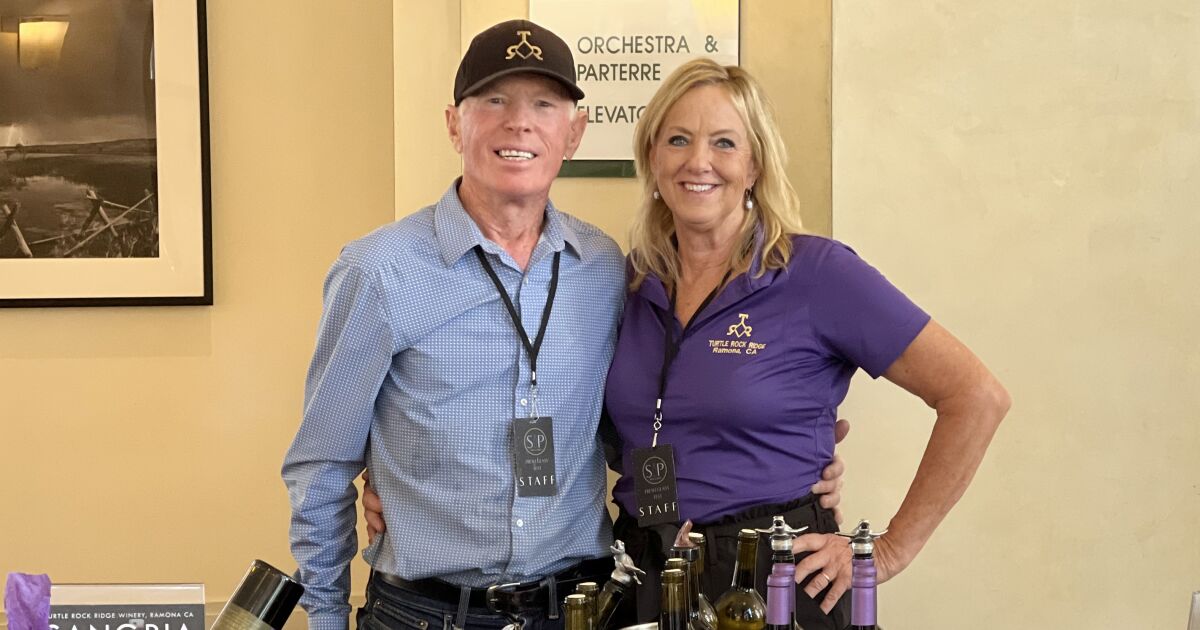 Nearly 25 years ago, Laurie Wagner and Ian Vaux purchased a vacant 10-acre sagebrush-covered plot near West Old Julian Highway with the intention of building their home there.

“We built it all up,” Wagner said. “We built the house, we planted the grapes. There was nothing here.

The couple learned that the site had housed a turkey ranch during the height of Ramona’s turkey farming history, around the 1930s and 1940s. Wagner and Vaux built their custom 4-bedroom, 4-bathroom Spanish-style villa there while living in a trailer on the property from 2003 to 2007.

During the time they were designing and building their home, the duo traveled to Europe and fell in love with the lifestyle and the wines. They also admired the way Europeans made productive use of their crops, such as feeding grapes to their animals and producing red wine vinegar from surplus grapes.

“In Europe, nothing would go to waste,” Wagner said. “Ian and I were just looking for a more natural, organic lifestyle.”

After returning to Ramona, Wagner said he saw a classified ad in one of the local newspapers in 2006.

“He said, if you produce less than 12,000 gallons of wine per year, the county is considering allowing you to have a winery on your property,” she said.

This, combined with their travel experiences, inspired them to plant their own vineyard. In particular, they planted Sangiovese Brunello grapes that they had seen growing in Montalcino, Italy, in Tuscany.

“Then in 2007 there was the Witch Creek fire and Ian stayed and saved our house from the fire,” Wagner said. “He saved our house and two of the neighbors’ houses at the current location. Thus, in 2008, we replanted grapes that had burned during the 2007 fire.

“Since that day, after the 2007 fire, we planted grapes and we haven’t stopped,” she said. “We don’t have any other jobs. It’s our only income and it’s what we’ve been focusing on since 2008. Since then, we’ve been working every day to build our dream.

This dream came true in 2010 when Wagner and Vaux obtained their winery license and opened their winery business two years later. They chose the name Turtle Rock Ridge because of a giant boulder overlooking the tasting deck that looks like a turtle’s head.

Since then, they have won numerous accolades for their variety of wines produced from locally grown red grapes.

For seven consecutive years, from 2013 to 2019, Turtle Rock has won the top prize in the Ramona’s Sentinel‘s Best of Ramona Readers Poll.

This year again, the winery also won the Fox 5 Winey Award for its wines. The award was based on a poll of Fox 5 San Diego news and weather station viewers who voted for Best Winery, Best Distillery, and Best Brewery in San Diego.

Wagner and Vaux accepted the award at a live awards ceremony in April.

“We were thrilled to be in the company of previous winners and to bring more visibility to the Ramona wine region,” Wagner said. “This is the 10th year that we’ve been open to the public for tasting, so we celebrated our 10th anniversary this year with a Fox 5 People’s Choice Award.”

Additionally, Turtle Rock guests can choose from a number of activities throughout the year. The next scheduled wine tasting activity is a Sip and Shop from noon to 6 p.m. on October 22 and 23. Usually held on the third weekend of the month, local vendors sell handcrafted items including knitted goods, jewelry and molten glass, locally grown produce, and homemade jams and jellies.

On October 28 at 7 p.m., Turtle Rock will host a presentation on a train journey through the Canadian Rockies by travel agent Debbie Cowles. She will share details of the tour scheduled for June 2023. To RSVP, email Cowles at [email protected]

Ramona’s Soroptimist International is also planning to hold a Wine Bingo fundraiser at Turtle Rock from 6-9 p.m. on Thursday, November 10. For $40 per person, attendees receive 10 bingo game sheets, a glass of wine, and dinner prepared by Something Delicious Catering. Tickets for opportunity draws and a silent auction will also be available. The fundraiser benefits Soroptimist’s SI Dream programs — Dream It, Be It for girls and Live Your Dream for adults. Tickets are available at siramona.com.

Wagner said some guests are taken aback by the winery’s cosmopolitan environment. In the past, Ramona had a reputation as a “dusty cowboy town,” she said.

The fall season is a great time to come and visit the cellar and the European-style tasting patio, she says. “It’s such a relaxing and such a pleasant experience. It’s beautiful to sit here in the evening. We love to visit with friends and the community. That’s what we saw in Europe and that’s the environment we wanted to create for everyone.

“People come here and say, ‘Is that Ramona?’ because they never left Main Street.