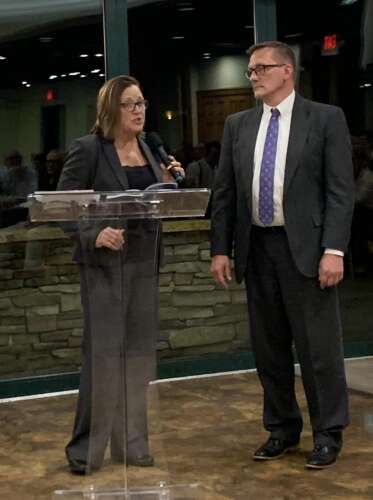 Community members gathered Thursday to honor the Tamaqua Area Chamber of Commerce Citizen and Businessperson of the Year.

“I couldn’t ask for a better person to share the spotlight with tonight than Jay,” Gursky said before receiving his award from House Speaker Linda Yeich.

Yeich credited Gursky with pushing the community forward through his various roles.

“I think we would still be struggling, but we are thriving,” she said.

Gursky graduated from Tamaqua Area High School in 1991 and Princeton University in 1995.

“People thought I was crazy when I graduated from Princeton and I said, ‘I want to go back to my hometown.’ I really didn’t consider it ‘back’ – I felt like I never left,” he said. “But they thought something was wrong with me.”

Since returning, Gursky has worked to change things for the better.

He served for 16 years on Tamaqua Borough Council and is the Director of Business Development for St. Luke’s University Health Network. At St. Luke’s, he strives to bring medical services to rural and underserved communities.

“It’s an amazing opportunity and I’m blessed,” he said.

Gursky has served as the executive director of the Tamaqua Area Nonprofit Community Partnership for 27 years.

He was instrumental in the development of the Tamaqua Community Arts Center and the expansion of Hope & Coffee.

He has also participated in numerous restoration projects, helped develop affordable housing, and attracted businesses to the borough.

“There are so many people behind the scenes in our organization. It’s really unbelievable. I just want to thank our board members,” he said.

“My dad left the Air Force and bought a house in Tamaqua for $12,000. There was no heat. We grew up with no heat,” he said. “When I was accepted to Princeton, a friend gave me a dress shirt because I didn’t have a dress shirt.”

He thanked his parents, siblings, children and wife, Penny.

“They sacrificed a lot because doing the things I do takes a lot of time and a lot of effort – and often they are the ones who sacrificed,” he said.

He also thanked his grandfather, a World War II Marine.

“He really helped me find the man I wanted to be,” he said, holding back tears. “I know he’s looking down and I hope he’s proud of me.”

Gursky praised a number of nonprofit organizations for the work they are doing in the community. He thanked them for their help and encouraged them to keep moving the community in the right direction.

“Jay reminds me of the Coal Region values ​​that my parents instilled in me: we get up every day. You work hard. You are being honest,” Yeich said.

Hollenbach is a longtime volunteer firefighter with American Hose Co. No. 1 and an active member of Bethany Evangelical Congregational Church, both in Tamaqua.

He sits on Tamaqua Borough Council and, with his wife, Gloria, has fostered 21 children. The couple adopted two, bringing their total number of children to four.

He is the owner of Jay Hollenbach Jr. Plumbing and Heating and Hollenbach Home Comfort Services, supports numerous nonprofit organizations, and is a member of several nonprofit groups.

“Jay strongly believes that change is best achieved through a grassroots effort with citizens who are volunteers who live and raise their children in the city and support local businesses,” Yeich said.

“I was really hoping Micah would come first because I knew his speech would be awesome so am I here to just say ‘Ditto’?” Hollenbach joked.

He thanked the Chamber for its work.

“But especially my family. Everyone around me really makes what I do possible,” he said.

The keynote speaker was Craig Poole, President of DoubleTree by Hilton/Reading Hospitality Management. He talked about turning a run-down hotel in Reading town center into one of the top 100 hotels in the world.

The success of the hotel is the subject of the documentary “Follow me and I will be behind you”.

Micah Gursky, right, has been named the 2022 Businessman of the Year by the Tamaqua Area Chamber of Commerce. He is accompanied by Chamber President Linda Yeich. JILL WHALEN/TIMES NEWS

Creative Entrepreneur Deepak Pareek on Starting Up During College, Building a Personal Brand, and More