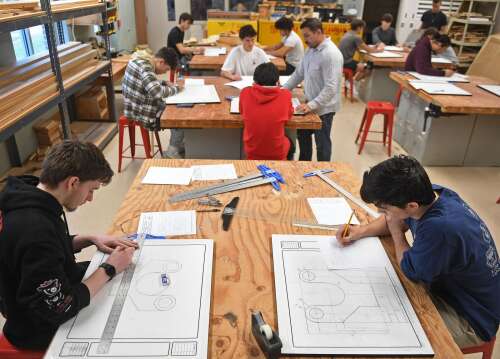 Stonington – On a Tuesday afternoon in October, a small group of juniors and seniors from Stonington High School sit in groups of twos and threes around sturdy wooden tables and listen to Dean Rocha explain the different types of bevels and chamfers .

Although these terms are unfamiliar to many, they are common among professionals. Fourth-grade teacher Rocha said they were part of the essential foundational knowledge for the state’s first students to participate in the Home Builders Institute’s Schools to Skills pre-accreditation apprenticeship program for trades. building.

Elder Aaron Cruse-Aleman is one of just 17 students taking part in the program. “It’s a class that’s going to help us branch off,” he said. “There’s a whole bunch of opportunities,” he observed, adding, “I think that’s the best option for me.”

For students who may not be heading to college, the program puts them on the path to careers in trades such as carpentry, electrical, HVAC, and plumbing.

The program also addresses the shortage of skilled workers in the state, as well as their aging population.

“The current labor shortage has reached crisis levels. We need to introduce young students to the trades and get them excited about building,” said Ed Brady, CEO and President of HBI.

Home Builders and Remodelers Association of Connecticut CEO and President Jim Perras pointed to data from the National Association of Home Builders that shows the median age of construction workers in Connecticut is 45, or three years older than the national average. In addition, he noted that statistics from the Department of Labor show that, nationally, 449,000 job openings in the field were reported this year, compared to 329,000 in 2021.

The Schools to Skills program is funded by a two-year, $10,000 grant from HBI, which pays for instructor professional development, curriculum, and associated testing costs for students.

The program uses one of three curricula approved by the United States Department of Labor, as well as several state education departments, according to HBI.

The program, currently used in 33 states, has four modules, including building tools and materials, construction math, workplace safety and employability. Successful completion of the modules and tests will earn students up to 150 hours for learning in one of the business areas.

Brady noted that HBI’s curriculum aligns with science, technology, engineering, and math curricula and “provides excellent career opportunities for students who are unable or unwilling to pursue a college track after graduation”.

The idea was reiterated by Superintendent Mary Anne Butler at the end of the summer when she said, “We continue to talk about diversity, equity and inclusion, and in my mind programming must also be inclusive and have different pathways for children.”

Cruse-Aleman said his father, who works at Davis-Standard in Pawcatuck as a CNC machinist, encouraged him to enroll in the program because it would help him find a job.

“Me personally, I don’t want to go to university; I just want to stick with a trade,” he said, adding that he also wants to become a CNC machinist, or maybe go into construction or plumbing. “I think it’s good, it’s a job I can get into. It’s perfect for me.”

When he started the class, he said he wasn’t really focused, but after seeing all there was to know, he changed gears. “I take it very seriously,” he said, adding that the class gave him more direction as well as more opportunities.

“The first semester is exhausting,” Rocha said of the program he is teaching for the first time this year. “There’s a ton of math,” he says. “I try to make it as exciting as possible and come from a different angle.”

He continued, “It’s our first year, and the groundwork isn’t quite done. We are understanding. The long-term goal is for them to get the core in the first semester and then follow a pathway in the second semester.

The program is designed in such a way that schools have great flexibility in how they run the program. As the program evolves, it will expand to include work placements that will give students the opportunity to try out different trades and gain hands-on experience working with local businesses.

“We started it, but it will really blossom in the future,” Rocha said, acknowledging that this year he is learning with the students and has had to adjust his teaching methods and lesson plans and roll. with the unknowns while they solve all the problems of the new program.

He presented the program not only as an introduction to business professions, but also as universally useful for students, whether or not they plan to go to university.

To illustrate this, 16-year-old junior Peter Wronowski isn’t sure college is in his future.

“I’m definitely looking for college, but it’s a good backup for me if I’m not really in college,” he said. He wants to go into engineering and sees the program as a way to deepen his knowledge in related fields.

“It definitely challenges you more than I thought it would,” he admitted, but said “it’s good how hard it is – it’s not just something easy to do – you have to do it. think about it and work on it with everyone.”

Sixteen-year-old Charles Worsdale also finds the job difficult. “There are a lot of little things that I didn’t know, like math,” he said, which includes trigonometry and geometry.

Worsdale, who discovered a passion for woodworking as a child working alongside his grandfather, said he got good grades, but “I’m probably leaning more towards not going to college,” though he thinks a business degree might help him get his own. business one day.

He started working in a carpentry shop this summer making tables and other furniture and wants to continue his career. “I’ve always had an interest in the trades, especially carpentry,” he says.

Although the work is difficult, he loves it and Rocha’s teaching methods. “He makes it enjoyable; he makes for a great time,” Worsdale said, adding, “it’s a lot more interactive than your English class.

“There’s so much to learn in the beginning,” echoed Rocha, but emphasized the benefits of hard work. “You take this course and pass, you walk into a room full of people who want to give you a job, and you can choose,” he said and explained “we’ve been to job fairs. Employers salivate for anyone, let alone someone who can shine.

Perras said HBRA-CT held discussions between carpentry, electrical, plumbing and HVAC business owners and the Connecticut Department of Labor to seek certification for the program. in the state.

“The Department of Labor wanted to know that if in fact you were a licensed commercial business owner looking for a new employee, they would hire someone who had gone through this program, and every person in that room said that she would,” at which point, he said, “we made a recommendation to the Department of Labor to certify the program, which they did.”

For students in the program, the certification they can receive through the program combined with labor shortages add up to a lucrative career right out of high school.

Rocha said, “I tell all these kids — I tell them, ‘You’re going to make more money than me in the first year if you do a good job.'”

For Cruse-Aleman, the potential salary after graduation is a plus, but he noted, “I want to do what I think is interesting; I don’t want to do this just for the money. He said, “I pay attention to what I really need to pay attention to,” so he can take advantage of the advance the program can give him in his career.